Next time you are preparing to hit the range, you need to stop and get a grip. Or maybe a handstop. Either way, if you aren’t using some sort of a forward grip or handstop on your AR15 you are missing out on enhanced control over your rifle, especially during rapid fire or close quarters drills. Whether you have some sort of grip on your rifle now, or you are wondering how you need to outfit the front end of your rifle, read on and determine what will suit your needs best.

Grips vs. Handstops and How to Choose For Your Build 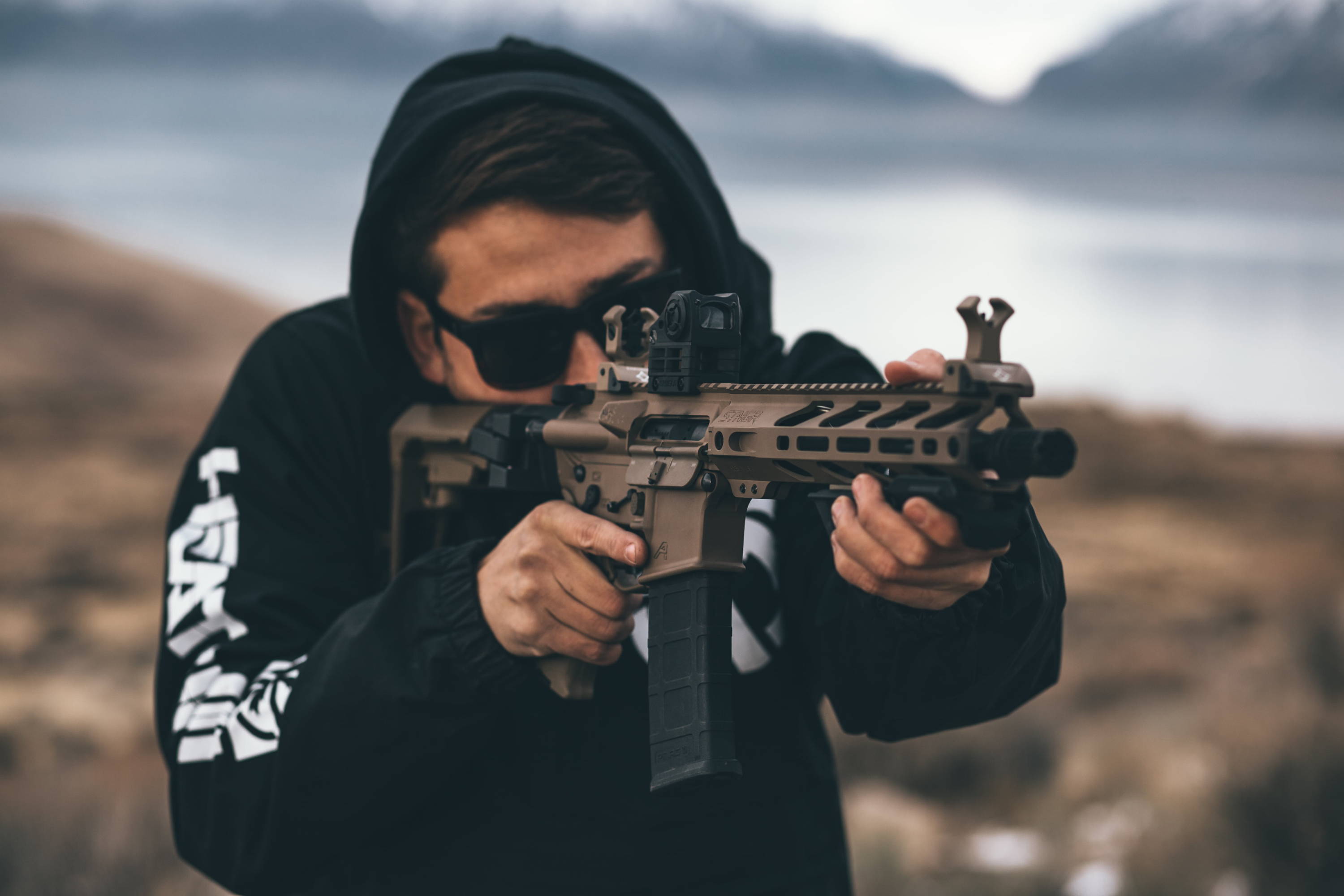 Grips and Handstops: What are we talking about here?

Both forward grips and handstops are used to help the shooter pull the rifle into their shoulder and better manage both recoil and control over the muzzle of the rifle.

Grips are generally a vertical handle extends downwards from the handguard and provide either a place to consistently index your hand to or give an alternate method of gripping the rifle with the off-hand.

Handstops are more minimal and give your off-hand a consistent point of reference on the front of the rifle to grasp while also stopping your hand from sliding backward when applying rearward pressure.

With the current trend in the AR market heading towards lighter and more minimalist rifles, we are seeing more handstops come into vogue. They can be identified as a small protrusion from the bottom of the handguard when installed, and they are usually very lightweight and minimalist. If you subscribe to the Chris Costa method of C-clamping your handguard, you will find that the handstop will put your hand where you want it every time and keep it in place when maneuvering the rifle between targets or through a course.

What’s up with grips? 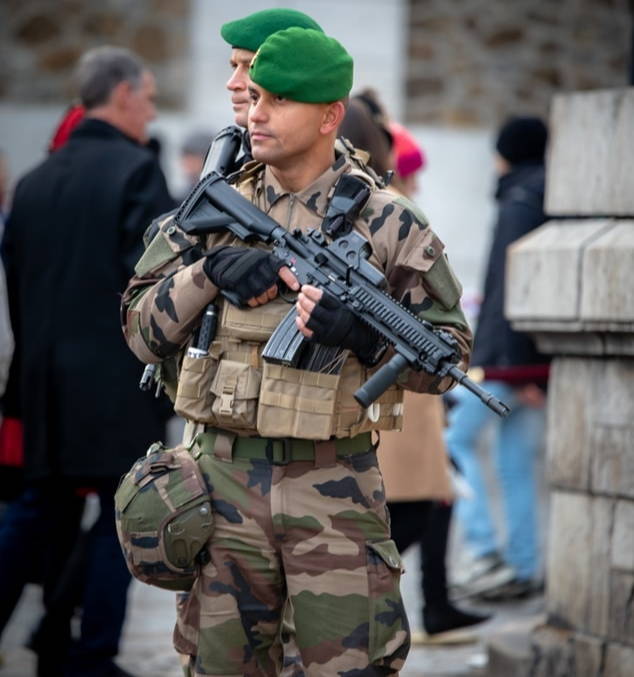 Vertical grips became very popular when the military started using them in the early 2000’s, and they continue to be a great option for many shooters. They also offer a consistent point for your off-hand to grasp. Usually vertical, but sometimes with an angle either forward or aft, the grip is going to be a larger accouterment to the AR15. They are immediately recognizable and are much more conspicuous than most handstops.

Some shooters will prefer the grip over grasping the handguard as it is a more natural angle for the wrist to sit at when shooting. With early grips, it was common for manufacturers to include storage space (which was great for professionals who have at least one battery-operated accessory on their rifle); current day it is much less common to see grips large enough to include storage, as they have evolved to be smaller with shooter's demands for lighter rifles. 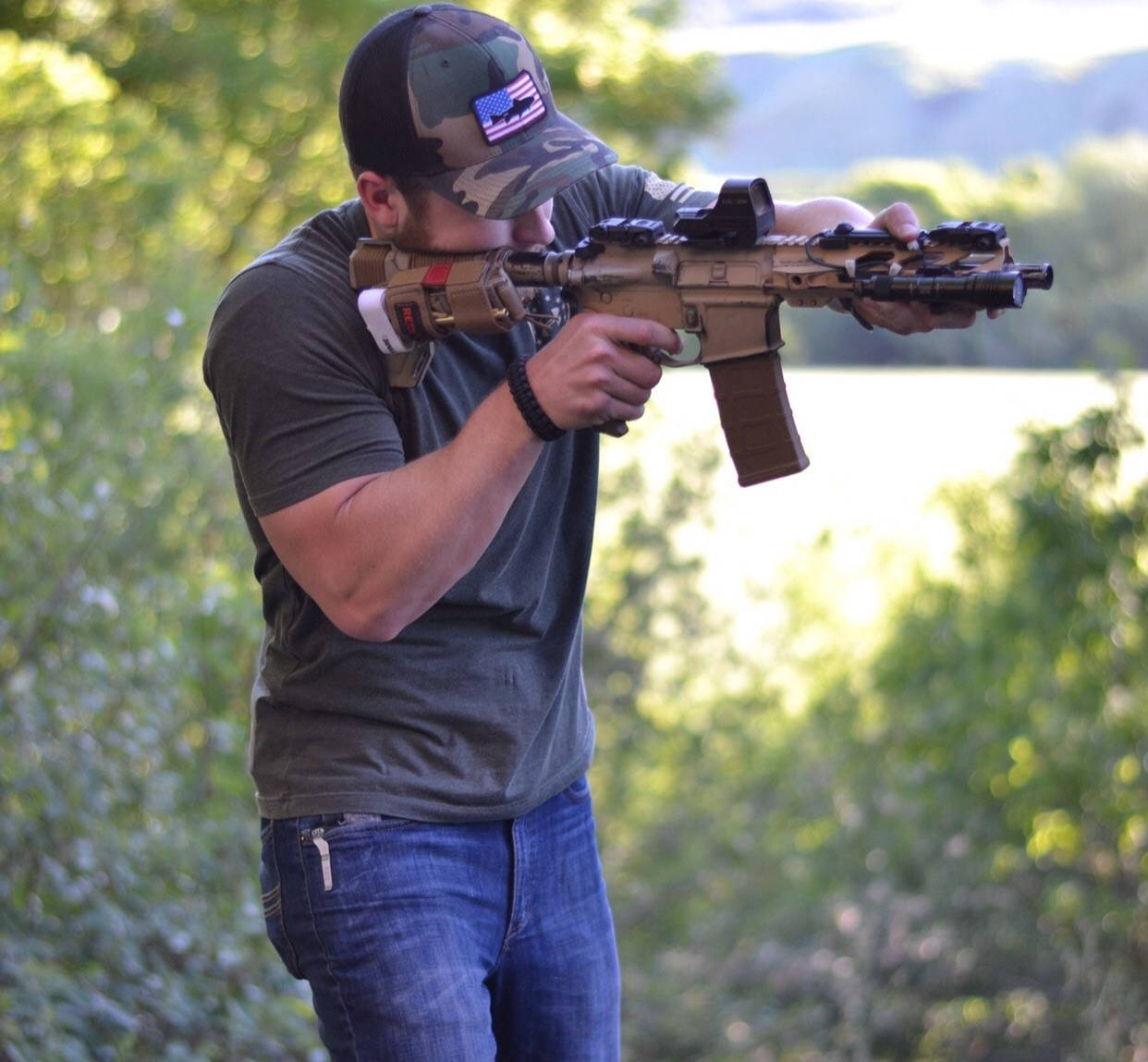 There are numerous pros and cons for each type of grip. It should be noted, however, that the cons are almost exclusively nonexistent when comparing the two options as there are few, if any, pros to avoiding some sort of forward accessory on most AR15s. With that out of the way, let’s compare the two options.

The handstop will generally only add a couple of ounces to a rifle and gives a huge enhancement to the controllability of the rifle. Many currently available grips will be lightweight as well, but there are several that still include storage areas or try to incorporate extra features such as bipods. Whether you see value in adding functionality to your grip or not, there is no chance the grip will be lighter than the handstop.

The grip will give better control than the handstop. As a larger device, it is easier for your hand to find it as a point of reference whether you are in low light or under duress. In training, muscle memory will be created sooner, and it is very easy to become familiar with the grip quickly. A larger grip can also act as a stop when leaning against a barrier for increased stability. You will also have the option of using the grip as a handstop if you do prefer to grasp the handguard.

Today’s lightweight handguards are amazing, and they offer us unprecedented levels of modularity while continuing to make the AR15 lighter and lighter. As we continue to see ounces shed from these handguards, we are losing material that we previously counted on as a heat sink to mitigate heat radiating from the barrel. The vertical grip will give you the ability to maintain control of the front of your rifle while moving your hand further from the hot barrel.

Depending on your state regulations, or the barrel length and status of your AR15 regarding ATF classification, you may not be legally allowed to install a forward grip on your rifle. Handstops are not considered a feature when installed on an AR15, thus aiding in adding functionality and ergonomics to the gun while maintaining a “featureless” status. 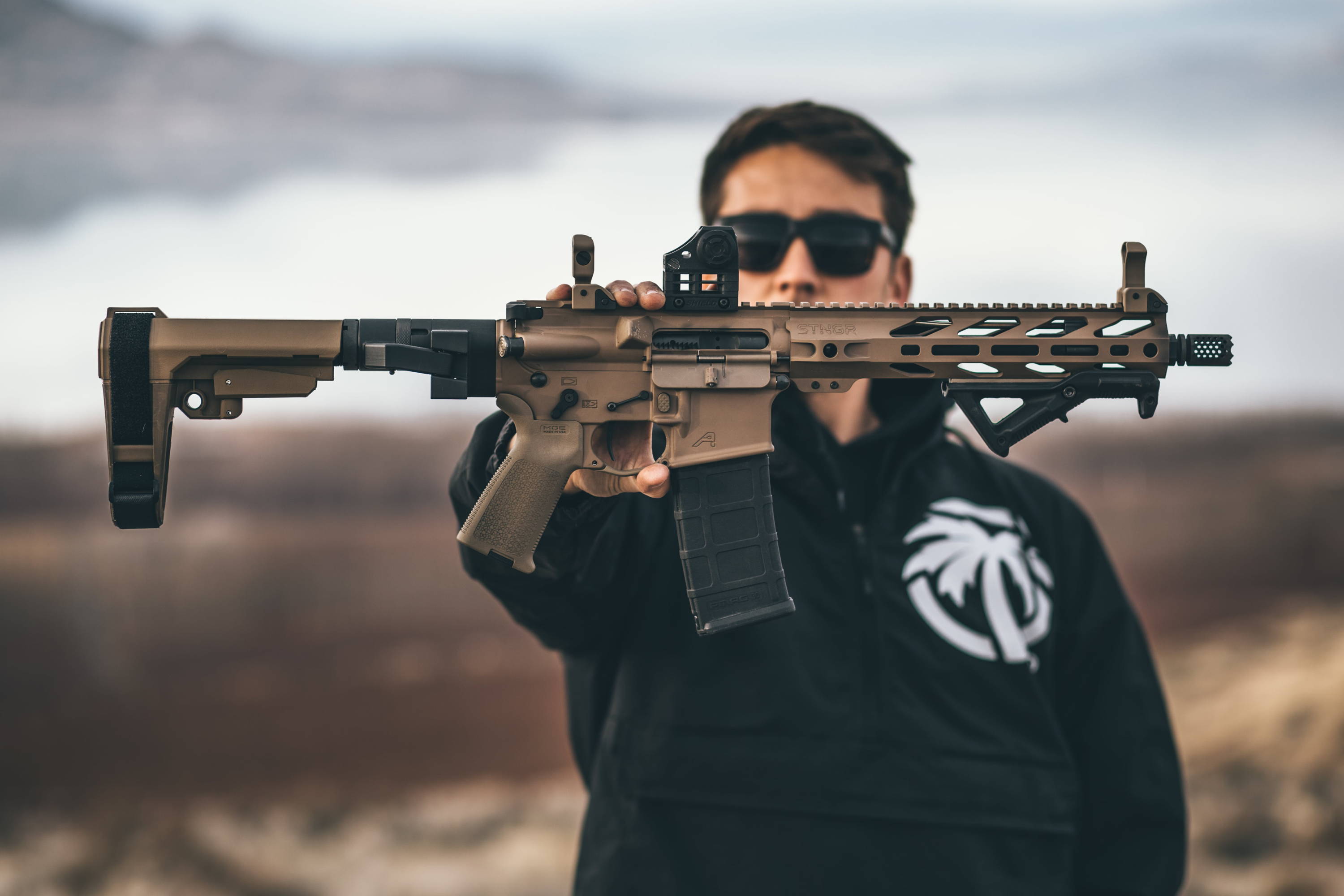 Which one is right for you?

You will have to be the judge on which accessory is right for your build, but there is no doubt that either will assist in making your AR15 more ergonomic. Whether you are looking to emulate a military build with a forward grip, or you are cutting ounces from your race gun, or maybe even just skating around the NFA, there are several reasons to choose one option over the other. While both have their merits, determine what type of build you are creating, and how you plan to use the AR15 once completed and make your decision that way. Of course, since AR15s are essentially Legos for adults, you could feel free to swap them out as you see fit until you find which device works best for your application. 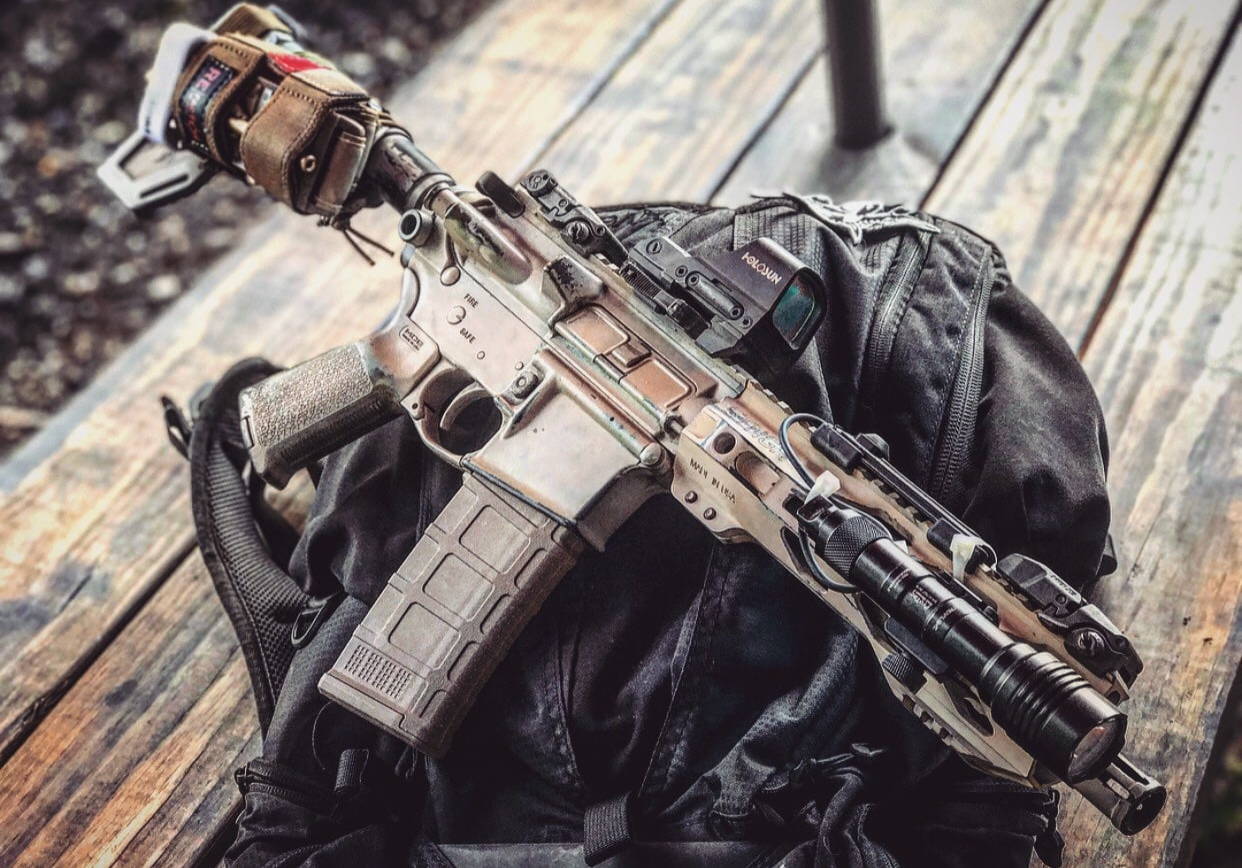