How to Choose a Gun Safe

Our firearms are a great investment we make. We spend a good bit of money on them, we trust our lives to them, and we expect to pass them on to our family someday. When so much may be at stake in case of an unfortunate situation, it is important to know that you are protecting your investment from the unexpected. For these reasons, the safe in which you choose to store your firearms may be just as important as the belongings you store inside of it.

Click on one of the links below to jump to a specific handguard review in the article.

Why do you need a gun safe in the first place?

There are a couple of reasons why gun safes should be considered an essential accessory for every gun owner. One is to secure the firearms from harm or theft, and the other is to keep the firearms out of the hands of those who might hurt themselves or others. The safe both protects the property and it also protects people from the firearms.

As nearly any responsible gun owner will tell you, safety is paramount when handling any firearm. How do we ensure safety with our guns when they are not in our hands? This is where the safe comes in to fill the void. When your firearms are not within eyesight, you cannot be absolutely positive that they are not being handled in an unsafe way; the best that we can do is ensure that they are secured in a way that nobody will be unintentionally, or otherwise, mishandling your firearms.

This is something that many people come to think of when there are children in the home, and I applaud the concern for children’s safety, but I also encourage you to think about friends and relatives who might pick up an unsecured firearm in your home and cause an accident due to either negligence or ignorance. If you keep a loaded firearm stored in a drawer and your neighbor finds it during a card game and discharges it, who’s fault was it really? Does it matter? Would this happen if the gun was stored in a safe?

Thieves are generally creatures of opportunity and will steal what they can quickly and easily get their hands on. Those of us who own firearms know that there can easily be a small fortune in a modest gun collection, and thieves know this. While gun safes are not a perfect solution on their own to completely deter all burglars, it can be the deterrent needed to keep your guns out of their hands. Even if your safe is defeated by a criminal, you will have a much easier time getting your investment back from the insurance company if you can show that you took precautions to protect your investment from just such a situation.

Protection from the Elements

Safes can also protect your firearms from other unexpected accidents. Fires or flooding can also cause irreparable damage to your firearms if they are left unprotected. Many safes are built with these circumstances in mind and are rated to keep your guns protected from fire or water damage in the event one of these unfortunate situations falls upon your doorstep. 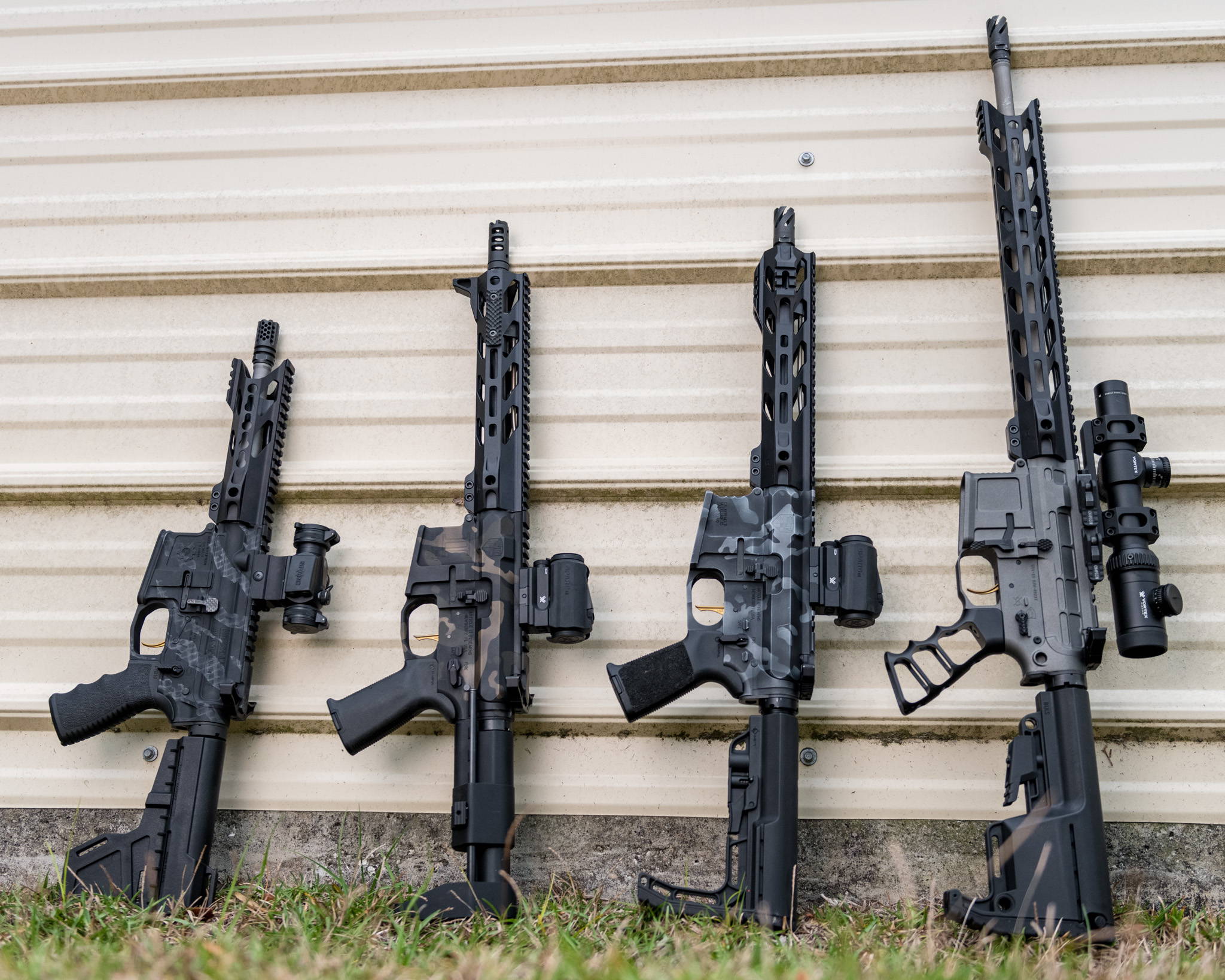 Considerations for Your Safe

There are many different safes available, and your needs and budget will determine which is right for you. Exterior construction, interior construction, locking method, how well the safe is sealed, and how many guns it can hold can all vary from model to model.

The size of the safe is something that can be overlooked when shopping for a gun safe. It is easy to think about what your current needs are and decide based on that information alone. Some considerations will include where the safe will reside, both in terms of which room at your location and where the room is located structurally. If you purchase the largest, heaviest safe available, you will need to be sure you have the means to move it to your desired location and you also need to know if the floor below can support the weight of that safe. Most floor systems in residential homes are not rated to hold the weight of a safe and placing a safe on an upper level could actually cause permanent damage to your home.

You should also consider your future needs. Will your safe need to be moved? Do you plan on growing your collection? Are you willing to purchase multiple safes? These are questions that should be considered before final purchase is made.

You can find gun safes that are glorified lockers, or you can find safes that are advertised as the next best thing to Fort Knox. One thing to keep in mind is that gun safes are almost never equal to traditional safes, and this will show in the cost if you ever compare a gun safe to commercial safe. A commercial safe will have a thick steel outer layer, followed by an even thicker concrete layer for fire proofing, followed by a relatively thin layer of steel on the inside; you will likely not find this in a gun safe from your local big box store. There are concessions made in construction for the sake of practicality for the consumer.

The most common safes will have an exterior steel wall with a thickness between 12 and 10 gauge. Some higher end safes will have exterior walls up to 7 gauge, which is about 3/16ths of an inch thick. An important point to note is that the door is nearly always thicker than the walls. This is because attackers will most often attempt to break in to the door of the safe rather than the body. Gun safe doors will almost always have thicker steel, boltwork, hardplates, relockers, etc. because that is the point of the safe that is most likely to be attacked.

Where should the hinges on the safe door be? Some believe they should be on the inside, inaccessible when the door is closed. However, many experts, such as those from Safe and Vault Store.com, don't recommend internal hinges. This is because with internal hinges the door won't be able to open a full 180 degrees (thereby decreasing accessibility) and also over time those doors will start to sag with the weight of the door. External hinges will allow the door to open a full 180 degrees and are built to last longer. Almost all gun safes with external hinges have deadbolts that lock behind the safe body when the door is shut. So even if someone cuts the hinges off, they would still have to pry the door open.

Mechanical (dial) locks are those that lack any electronic components which make them especially long-lasting and reliable. There are varying degrees of complexity of these mechanical locks available on the market, with varying price points. While mechanical locks have a reputation of being quite tough to crack (and therefore very safe), their main drawback is that the process to open the lock can be quite lengthy and therefore they are not recommended in situations where obtaining the weapons inside is a time sensitive issue (such as if the weapons are needed for self defense). Mechanical locking systems are best suited for owners whose main priority is safe, long-term storage of their weapons.

Electronic locks have become increasingly more reliable over the years, and are therefore a very popular option for gun safes. An electronic (or digital) lock consists of an external pin-pad or screen where a predetermined code is input and releases the internal lock to allow the safe's door to be opened. A big pro of the electronic locks is that the code can be selected and can be set to be as short and easy to remember or as long and complex as desired. They are especially useful in situations where quick access to the contents is absolutely necessary. However, since the parts are electronic, they are more prone to degradation and require an energy source in order to function properly. They are more susceptible to damage from flooding and fires which make them slightly less reliable than a mechanical locking system.

Waterproofing safes is extremely challenging and expensive for manufactures. If you are concerned about flooding where your safe is stored, it certainly won’t hurt to look for a safe with a waterproof rating, but do not plan on this as your only plan to mitigate water damage in your safe. Store ammunition in waterproof containers inside the safe and use garbage cans inside the safe to set long guns in to give a couple of feet of safety from water damage.

If your gun safe is fire rated, it will probably use a layer of sheet rock between layers of steel to achieve this rating. Some gun safe manufacturers use a concrete composite material instead of sheet rock. A fire will cause devastating damage to your stored guns. Therefore, a safe with fire rating should be strongly considered when making your choice.

My final tip for your safe is to make sure you anchor it down. Nearly all modern safes will have holes that can be used to bolt the safe to the floor. Use steel lag bolts or concrete anchors, depending on the construction of your floor, and use epoxy to ensure the bolts a permanent part of the floor. Most modern epoxies are stronger than the concrete you will place the anchors in, so you don’t need to be a carpenter to get the right stuff. Anchoring down the safe is one of the most important, but also overlooked factor. Your safe could be the most uncrackable safe in the world, but if it's completely removed from your location, the contents will still be lost. 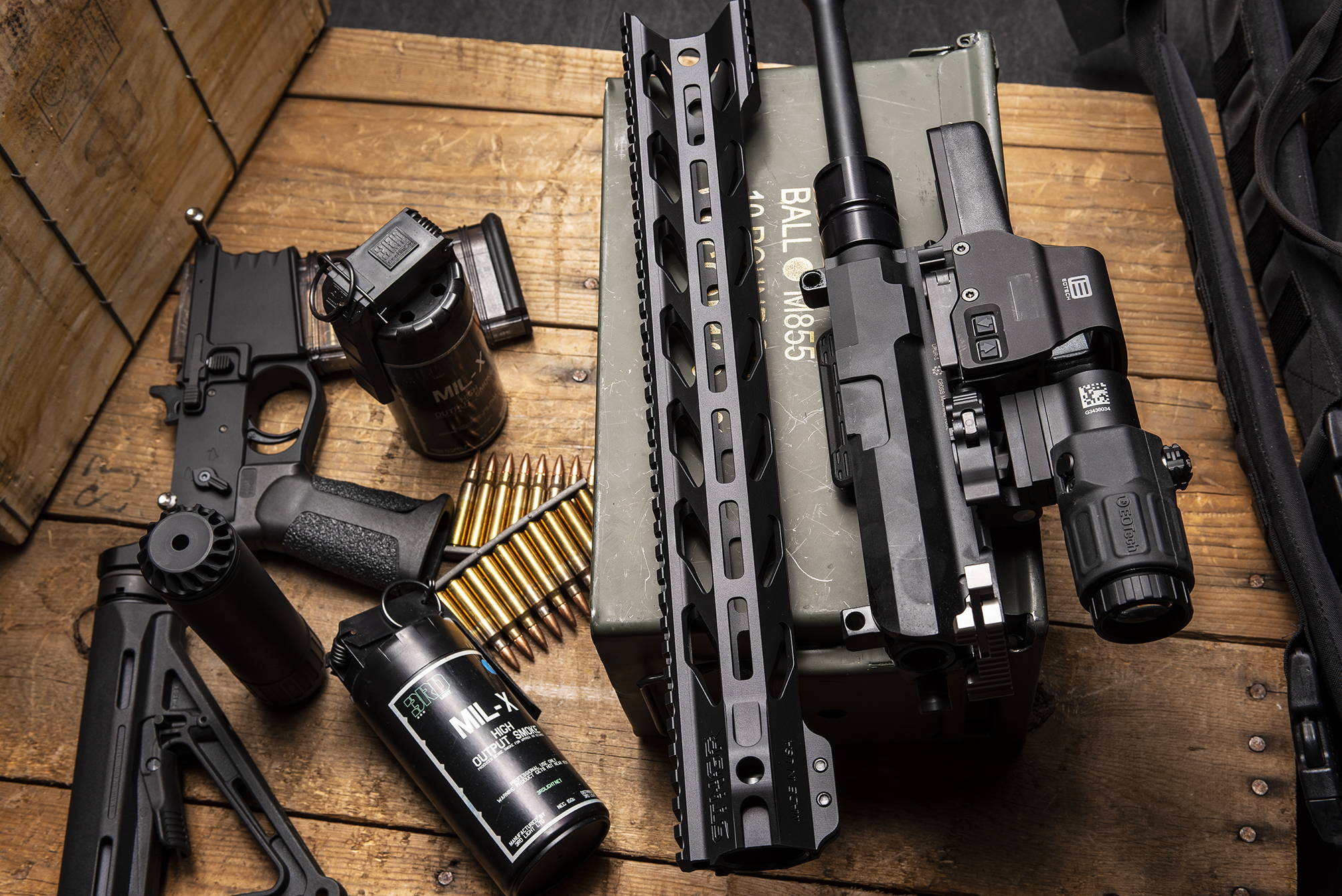 Safe and Vault Store.com offers a huge variety of high-quality gun safes, and their website is host of knowledge with how-to guides, instruction manuals, FAQs, and buying tips.

The AMSEC TF5517E5 30 Minute Gun & Rifle Safe has a 30-minute fire rating, will fit great in a closet, and can hold 11 long guns without scopes.

The Hollon BHS-16E Black Hawk Series Gun Safe will hold up to 16 long guns without scopes, has a 90 minute fire rating, 10 gauge steel in the body, and ten 1.5" thick bolts to prevent prying open of the door. 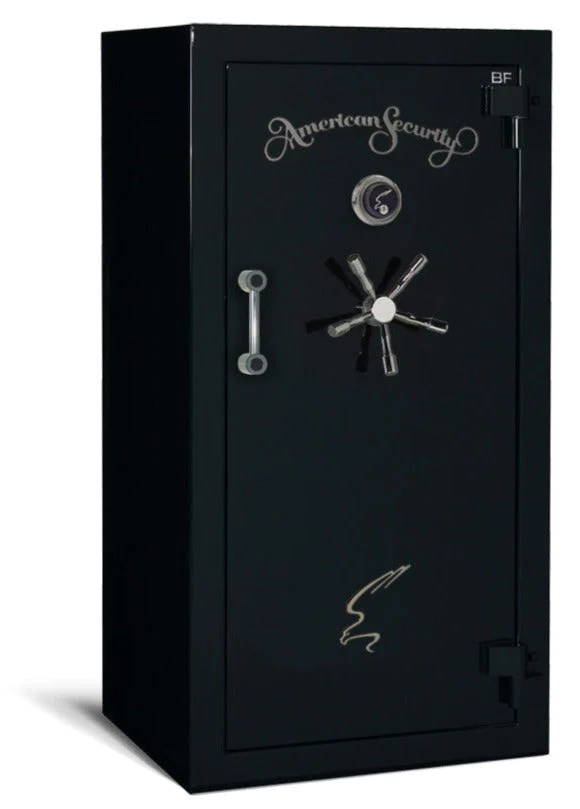 This is a top selling Stealth safe offering an affordable price for a quality product with the basic security features to give you peace of mind when storing your valuables. This particular size in the Stealth lineup is designed with a subtle American Flag on its door.

Check out DeanSafe for a wide selection of other gun safes. 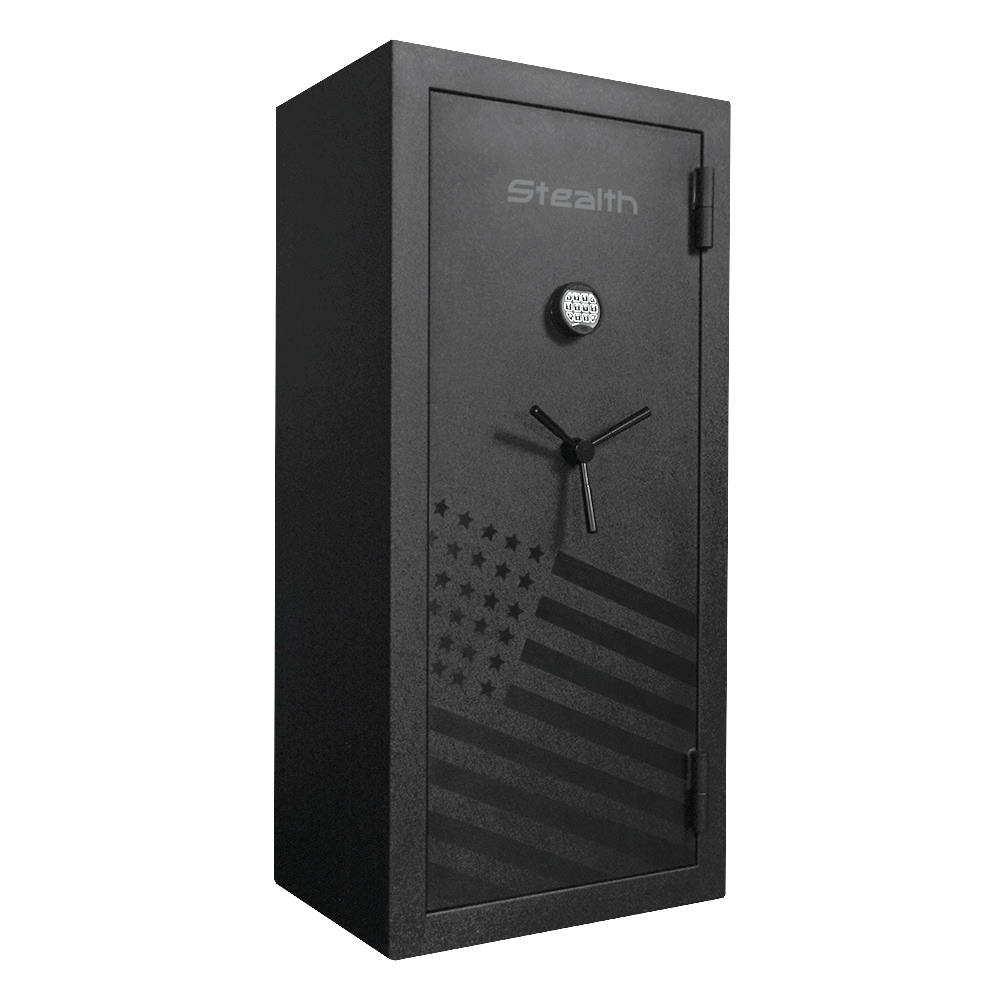 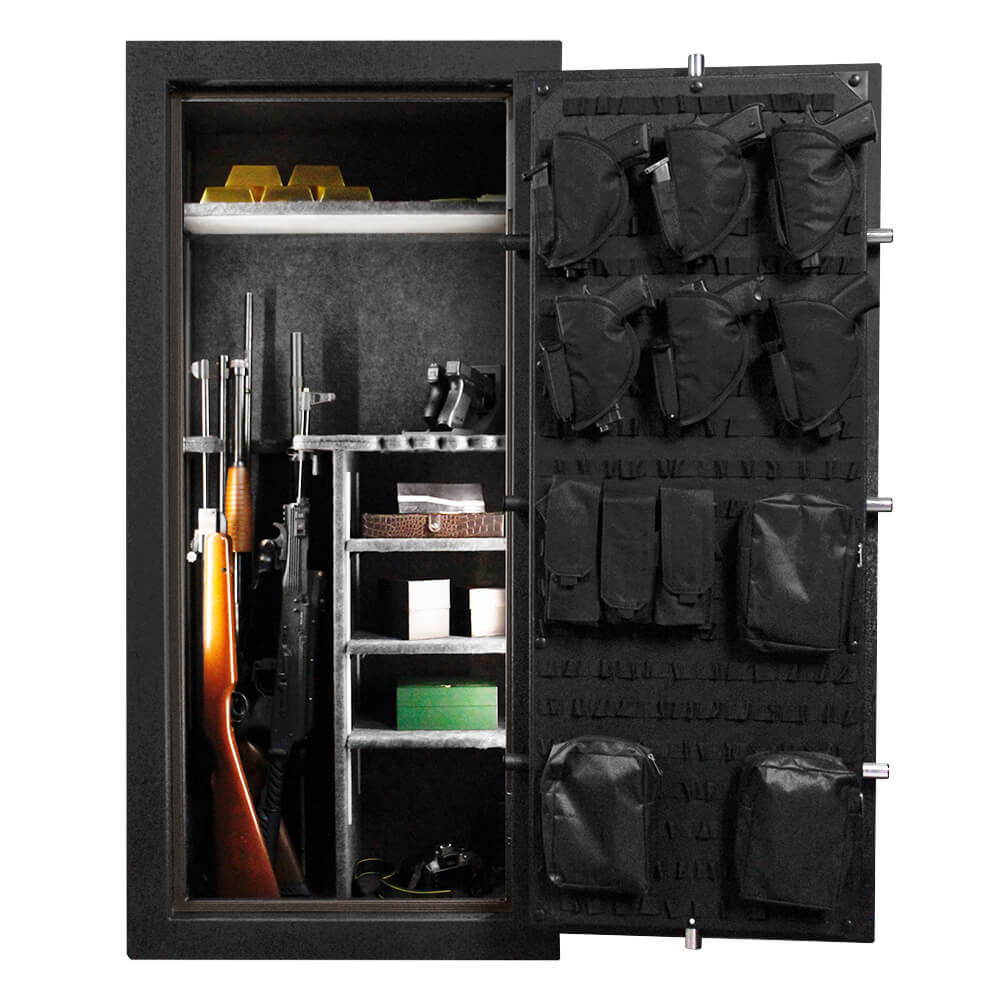 At the end of the day, any quality safe will help protect your investment and your loved ones when it comes to your firearms. There are certain limitations to what a gun safe can provide, but regardless of any anecdotes about gun safes failing, keeping your firearms secured behind a lock is the best way to ensure they safely stored.